This $1000 award was established in 2014 to recognize excellent teachers serving     under-resourced communities and inspire others to make the same commitment. Through 2020, we’ve given this award to 36 teachers. 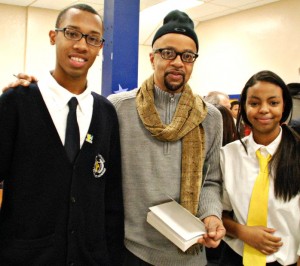 in Brooklyn’s Red Hook projects. He is an accomplished writer and musician and serves as an inspirational role model for students. In 2015 President Obama awarded him the National Humanities Medal for humanizing the complexities of discussing race in America.

Jonathan read McBride’s landmark memoir, The Color of Water,  when he was 11. He was profoundly moved.  It raised his awareness about race and poverty and motivated him to do something about it; whether it was collecting band instruments for a KIPP charter school in rural North Carolina or raising money to build a well in Africa.

The book is a tribute to McBride’s mother, a white Jewish woman from Poland who married a black man, founded a Baptist church, and put 12 children through college. It is also a testament to the power of education to transform lives. A graduate of Oberlin and Columbia School of Journalism, McBride is a born storyteller, whose book, The Good Lord Bird, won the 2013 National Book Award.

Jonathan was a talented musician, conscientious about his politics and helping others.   He was well known in New Hope, often remembered as “an old soul” who loved a good debate. A freshman at Oberlin College, Jonathan died in a car accident at age 19. After his death his mother wrote to everyone that influenced her son, whether they knew him or not. James McBride was one of those people.